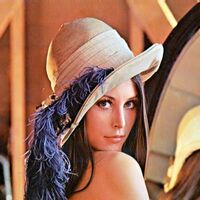 The image offers a wide range of detailed areas and smooth out-of-focus areas, making it ideal for testing compression algorithms.

Lenna (or more properly Lena) is a portion of a picture of a naked woman from the November 1972 issue of Playboy magazine. The name "Lenna" comes from Playboy's naming in the original article—the spelling change was made so that English-speaking readers would read the name closer to the true pronunciation of the Swedish "Lena". The picture is so well known that the model, Lena Soderberg (née Sjööblom) of Sweden, was a guest at the 50th annual Conference of the Society for Imaging Science in Technology in 1997.

The use of this image has produced some controversy, with some people concerned about its prurient content, and Playboy at one time threatening to prosecute over the unauthorized use of the image. The magazine has since abandoned the threats and has embraced the use of "Lenna" for publicity reasons. Wired says [1] "Although Playboy is notorious for cracking down on illegal uses of its images, it has decided to overlook the widespread distribution of this particular centerfold".

The picture's history was described in the May 2001 newsletter of the IEEE Professional Communication Society, in an article by Jamie Hutchinson:

"Alexander Sawchuk estimates that it was in June or July of 1973 when he, then an assistant professor of electrical engineering at the USC Signal and Image Processing Institute (SIPI), along with a graduate student and the SIPI lab manager, was hurriedly searching the lab for a good image to scan for a colleague's conference paper. They had tired of their stock of usual test images, dull stuff dating back to television standards work in the early 1960s. They wanted something glossy to ensure good output dynamic range, and they wanted a human face. Just then, somebody happened to walk in with a recent issue of Playboy.

"The engineers tore away the top third of the centerfold so they could wrap it around the drum of their Muirhead wirephoto scanner, which they had outfitted with analog-to-digital converters (one each for the red, green, and blue channels) and a Hewlett Packard 2100 minicomputer. The Muirhead had a fixed resolution of 100 lines per inch and the engineers wanted a 512 x 512 image, so they limited the scan to the top 5.12 inches of the picture, effectively cropping it at the subject's shoulders."

Retrieved from "https://computervision.fandom.com/wiki/Lenna?oldid=2196"
Community content is available under CC-BY-SA unless otherwise noted.